FIVE BENEFITS FOR YOUR MIND FROM TANDEM SKYDIVING 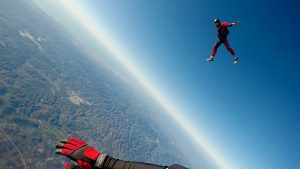 As in any sport, very few of us can call ourselves experts in extreme sports. When engaging in extreme sports like parachuting, almost every participant can learn something new every time he or she participates. For some novice participants, the instructor is physically connected, like when a first time jumper goes tandem skydiving. For more experienced participants, refresher training or just swapping stories with other participants allows for learning opportunities.

Facing the danger and thrill involved in extreme sports has been proven to improve participants’ ability to face, manage, and overcome fear. Facing a thrilling situation, like the freefall of skydiving, trains the participant’s mind to remain focused and relaxed rather than succumbing to panic. Once the activity is successfully completed, the sense of achievement in overcoming a real obstacle boosts the participant’s courage to face that fear again and, more importantly, transforms the participant so he or she can face other fears. Some participants say that participating in extreme sports helps them to separate real fears from irrational fears, thereby helping them to cope with real fears and dismiss irrational fears.

Contrary to popular belief, many participants in extreme sports say that they do not participate solely for the rush. To be sure, the freefall of skydiving before the parachute opens is thrilling, but according to many participants, this is not the only reason they participate in extreme sports. Rather, they participate to achieve a goal. These participants point to the process of setting a difficult goal, working hard to develop the necessary skills and physical ability to pursue the goal, and feeling the sense of achievement when the goal is finally reached as being as rewarding as the adrenaline rush while participating in the activity. Achieving a difficult goal is not only enjoyable, but helps participants gain the confidence and self-esteem to control risk and pursue goals in other areas of their lives.

Extreme Sports Help Participants Find Their Place in the World

According to one study, participants in extreme sports like skydiving develop a sense of humility. This arises from experiences, such as the freefall of skydiving, that illustrate the power of forces outside of humans’ control, such as gravity, and the understanding that these forces are greater than humanity. Humility helps people exercise greater self-control, inclusiveness, and generosity.

Even if most participants in extreme sports are not strictly seeking thrills, the thrill of extreme sports does have benefits. Specifically, the rush experienced during extreme sports can boost the mood of the participants by causing a release of adrenaline and, more importantly, dopamine and endorphins in the brains of the participants. Endorphins are neurotransmitters that reduce sensations associated with pain and stress and create feelings of euphoria. It is believed that endorphins are responsible for the feelings of a “runner’s high” during vigorous exercise. Dopamine is a neurotransmitter that helps the brain remember and give significance to a reward in the brain’s reward system. Thus, endorphins create the positive feeling and dopamine makes sure the brain remembers it. For example, the thrill of the freefall while skydiving creates a rush of endorphins, which make the skydiver euphoric, and dopamine, which encodes the memory of that feeling of euphoria in the brain.

Extreme sports, like skydiving, can have positive mental and emotional effects on the participants. These benefits range from short term effects, such as improved mood and learning new skills, to long term effects, such as a greater sense of humility, increased self-esteem, and an improved ability to confront, manage, and overcome fear.